Zara parent Inditex has said it reached a “turning point” over the summer, returning to profitability, after the pandemic weighed heavily on the world’s biggest clothing retailer earlier in 2020.

The company said its online and retail sales progressively improved during the summer months after reaching a trough of just 28 per cent of the previous year’s level during the peak of the crisis in April.

From August 1 to September 6, sales rose to 89 per cent of the total from the same period the previous year, up from 83 per cent in July and 72 per cent in June.

“Store sales have been recovering progressively. Online sales continue growing at a remarkable pace,” the company said on Wednesday.

The improvement in the Spanish-based company’s performance helped lift it back to profitability in its financial second quarter, which ran to July 31. It recorded a net profit of €214m over the period. The group had sustained a loss of €409m in the first quarter, which included a €308m provision for an updated technology programme.

Overall sales were still down 31 per cent from the previous year to €4.7bn, but this marked an improvement from a fall of 44 per cent during the first quarter. Analysts at Société Générale had expected a drop of 36 per cent in the latest quarter. 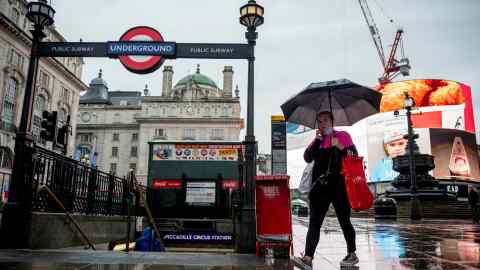 Inditex’s announcement on Wednesday comes a day after Hennes & Mauritz said it expected to return to profitability as the Swedish clothing seller enjoyed a stronger than expected recovery from the coronavirus.

Inditex, which was founded by Spanish billionaire Amancio Ortega, predicted the third quarter will see “a progressive return to normality” as online and store sales recovered from the pandemic-driven slump. It has now reopened 98 per cent of its stores.

The group, like others in the sector, has benefited from a surge in online shopping after it was forced to close many of its stores due to lockdowns around the world. Online sales jumped 74 per cent from the start of February to the end of July.

Pablo Isla, executive chairman, highlighted the online sales growth that demonstrated “the critical importance of our integrated store and online platform strategy”, adding that it is the “cornerstone” of the business.

Handelsbanken to close almost half of Swedish branches