Spain’s economy will struggle to recover from the impact of the coronavirus pandemic to such an extent that it will still be as much as 6 per cent smaller at the end of 2022 than it was before the crisis hit, according to the Bank of Spain.

In a grim set of economic projections released on Wednesday, the central bank highlighted the destructive impact of both the initial coronavirus outbreak and of the resurgence in infection rates following the end of the country’s lockdown in June.

Spain’s economy contracted a record 18.5 per cent in the second quarter of this year compared with the previous three months, following a 5.2 per cent first-quarter contraction.

The central bank expects a rebound of between 13 and 16.6 per cent in the third quarter. But it noted that what appeared to be a relatively strong economic recovery, following the relaxation of restrictions, lost pace from July as the virus resurged, with some indicators falling back in August.

The bank laid out two sets of forecasts, depending on how the pandemic develops, and emphasised the high degree of uncertainty about the potential outcome.

Under the first scenario, in which economic activity would be less constrained by anti-virus restrictions, gross domestic product would contract 10.5 per cent this year, with only a limited recovery over the next two years, leaving GDP 2 per cent below 2019 levels by 2022.

In a more pessimistic scenario, GDP would decline 12.6 per cent this year and remain slightly more than 6 per cent below 2019 levels in 2022.

Both scenarios assume that measures to restrict the spread of the virus would lift midway through next year as a vaccine or other treatment became available. 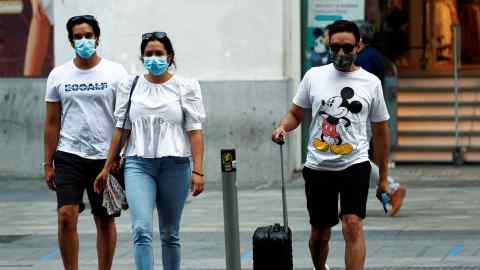 The pandemic has hit Spain harder than most countries in Europe, in both human and economic terms. Spanish infection rates are far above any other country in Europe. Madrid, one of the chief motors of the Spanish economy, is also the worst-affected region and is expected to announce new restrictions in the coming days.

Spain’s exceptionally high dependence on tourism, dysfunctional labour market, in which roughly a quarter of all workers are on temporary contracts, and the prevalence of small companies, which can lack the resources to withstand a severe downturn, are all factors that have contributed to the economic damage.

As temporary leave schemes and bans on dismissing workers expired, Spain’s unemployment rate would rise in the pessimistic scenario to 22.1 per cent next year before falling back slightly to 20.2 per cent in 2022, the central bank said, while debt as a percentage of GDP would rise from 95.5 per cent at the end of 2019 to 128.7 per cent in 2022.

But its calculations did not factor in the EU’s €750bn coronavirus recovery fund, from which Spain expects to receive €120bn in grants and loans. The timing, nature and effectiveness of the country’s use of this money had yet to be determined, the bank said. It also warned of the potential negative economic impact of both of a no-deal Brexit and US-China trade tensions.

Art Basel OVR:2020 and the dawn of new platforms

Letter: Challenging the defence of the hedonistic young
55 mins ago

Letter: Challenging the defence of the hedonistic young