I have become fascinated by #vanlife. I’ve never slept in the back of a vehicle — well, except for that time when I drove for hours to a rave up a hill in Worcestershire 20 years ago and couldn’t find it, or the year when I forgot to book a room at the Hay Festival.

Otherwise, the appeal of sleeping in a lump of metal has been limited. It was a sign that you’d failed to sort out lodgings.

But turn on Instagram, and this is the height of chic: #vanlife is a cult in which people convert their vehicles, often the humble VW Transporter — the favoured conveyance of plumbers — into a bijou wheeled dwelling and tour the world in it. There are 8.4m posts under the hashtag.

A beer company is sponsoring someone to spend six months sleeping in a van in America’s national parks, taking photographs of the beautiful scenery, presumably with said beer in the foreground and, in the UK, the self-build campervan Facebook group exploded with posts this summer during lockdown — there are now a quarter of a million members.

Here is a generation of young people, and some quite mature ones too, out on the road, living the dream and being very smug about it. California, southern Europe and Cornwall are their regular playgrounds, and Instagram is filled with pictures of people flinging open their back doors on to beautiful seascapes or mountain ranges, the sort of view one would normally have to spend decades slogging in the finance sector to buy. (The roadside layby, the fail-safe park-up spot, doesn’t feature so often.) 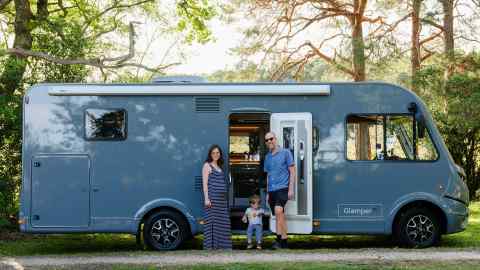 One might see this as reflecting a crisis of our times — a generation living peripatetically because they can’t afford a flat. This is true in a number of cases, and may deepen as the recession kicks in. But a fair few others who’ve got money in the bank — thanks, grandma — are turning the hitherto poor traveller’s life into a destination itself. These vanlifers are sticking two fingers up at our modern religion of home ownership.

But however wild they go, this isn’t entirely an escape from domesticity. Snoop around inside a van, or watch the obsessives on the Facebook construction forums, and you see people who’ve spent more time and attention on the details than a bored 1950s housewife with her husband’s cheque book.

The vanlifers scour the internet for second-hand horse boxes, Lutons and tradesman vans and get to work. These micro-home builders fret about the mundane details of how to plumb in their sink, insulate and wire in their electrics. Despite the industrial exterior, inside there are often wood slatted ceilings and walls, a sort of Tiroler Hut crossed with Swedish sauna vibe.

It is a Wendy house on wheels, with all the mod cons. This isn’t strictly communal hippy living. They are wannabe homeowners with total control of their space.

I also note another loophole in the “I don’t need a house” philosophy. I’ve had a fair few turn up to stay on the land I own in return for helping out in the garden. They roll into my kitchen, put the electric kettle on, soak up my internet, register for universal credit at my address and then enthuse about their life choices.

They’ve escaped the rent trap — a smart move during coronavirus if you can’t plot your income. Their costs are petrol, road tax, repairs and the labour of making their occasional hosts — like me — enough cups of tea to make me forget I’m the only one around the table paying council tax.

I was having dinner the other night with a respected economist, chewing the fat over the question of how much demand there really was for housing in the UK. His answer was “an infinite amount”. It wasn’t about a place to live but the thrill of the acquisition. Ask a person who already owns an apartment whether they’d like a townhouse as well, he posited, and perhaps a beach hut and a castle, and the answer is always “yes”.

Having faced a few stonking house maintenance bills, I disagreed. But
I thought again about the vanlifers, for whom the immovable foundations of a house are a bit retro, like buying a £14.99 CD when, for half that price, you can have the Spotify subscription to all the music of the world. Bored of the view or of making me tea? Fill up the tank and head off to where the grass is greener.

The economist may be right. Some of us will not tire of property acquisition. But how many of us sit in our hard-earned and well-heated homes, quietly envious of those who have chosen a different path?