When the pandemic prevented Atlanta-based investment analyst Nancy Razzouk, 29, from seeing her husband for months, she found the perfect solution to the loneliness: Bruce, a golden retriever.

Ms Razzouk admits she spoils Bruce. He eats sugar-free pet yoghurt, home-made ice cream and receives toys from a subscription service. But if the recession cuts into Ms Razzouk’s income, “I will scale back if I need to,” she said.

The £104bn global petcare market has boomed during lockdown. Companies from the world’s largest foodmaker Nestlé to UK retailer Pets at Home have benefited as lonely householders adopted animals in record numbers. Now, however, there are fears that the economic crunch caused by coronavirus will crimp that growth.

“In any market [in a recession] we see people managing their spend through either looking at cheaper products, trading to private label alternatives or shopping in cheaper stores,” said Tesni Steele Jones of market researchers Kantar.

The American Pet Products Association in a June survey found over a quarter of owners view pet supplies as discretionary and plan to curtail purchases to save money — though the rest said their pet spending was recession-proof.

Chewy, a US online pet goods retailer listed last year, has been a focus for optimism, especially as investors sought pandemic-proof business models: Chewy’s share price has risen some 180 per cent since March as sales have climbed. At Nestlé, the Purina petcare division has been the largest contributor to its growth this year.

Peter Pritchard, chief executive of Pets at Home — whose shares are up 40 per cent this year — said: “More people’s working lives are more home-centred, and that facilitates their ability to have a pet. That’s probably been the structural change that’s taken place through the pandemic.”

Petcare was growing strongly before the pandemic. Over the past decade the size of the global market has expanded by an average 5.8 per cent a year, according to Euromonitor, more than double the rate of the confectionery market, for example. In China, the world’s second-largest petcare market, the average annual growth rate was 20.7 per cent.

This has led consumer goods companies such as Nestlé and Mars to pour resources into the sector. US food group General Mills jumped in with the $8bn acquisition of pet foodmaker Blue Buffalo two years ago.

Bernard Meunier, chief executive of Nestlé Purina Petcare for the EMENA region, said: “The pet population is growing around the world at a slow but regular pace. There is also . . . this humanisation trend at play, for pets to be considered more as part of the family.”

The pandemic appears to have boosted such high-end goods, at least in the short term. One Los-Angeles-based luxury pet accessories maker, Moshiqa — which sells products including a $360 dog harness — saw an eightfold surge in sales in the March to May period compared with the previous three months, including a particular rise in orders from China.

There is also a trend for feeding animals meals to rival their owners’. Nestlé two years ago bought a majority stake in Tails.com, a direct-to-consumer dog food business that tailors food to particular dogs using a proprietary algorithm. It also makes a supplement to calm dogs’ anxiety.

Meanwhile in emerging markets such as Turkey and several countries in north Africa and the Middle East, people are adopting and feeding street animals, Mr Meunier said. Warren Ackerman, analyst at Barclays, said a process of “calorific conversion” was under way in which animals are fed commercial pet food rather than scraps from the table.

Alongside the pandemic rush to adopt animals, pet owners stockpiled food, while a large chunk of petcare sales moved online overnight. Amazon was one beneficiary.

Another was Chewy, where sales rose 47 per cent year on year in the second quarter to $1.7bn. Sumit Singh, chief executive, said: “A growth curve that was supposed to play out over years has been played out over weeks.”

Demand for services such as grooming fared less well, forcing providers like private equity-owned US retailer PetCo to rush to turn them digital: it set up remote dog training, at-home grooming tutorials and tele-health. Edge by Ascential now predicts PetCo and rival PetSmart will perform below original expectations this year. Safety measures for reopened services have also added to costs. 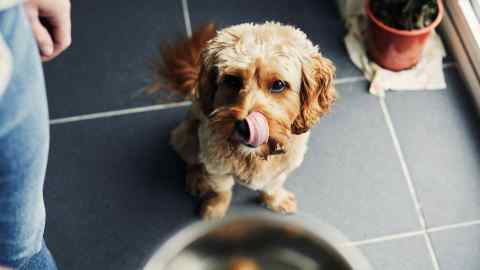 Along with the recession, several charities have warned of potential mass abandonments of pets adopted in the pandemic. Yet analysts at Barclays believe the petcare boom has much further to run, fuelled by demographic trends such as smaller households.

Pets at Home’s Mr Pritchard is sanguine. “We would never say we’re recession-proof [but] pets are very much a loved part of the family. People are more likely to cut back on holidays, cars, sofas before they impact their pets.”

Lewis Kennedy, a 24-year-old booking clerk based near London, agrees. He adopted two dogs during the pandemic and says any hit to his finances will not affect their care.

“We’ll never cut down on expenses,” he said. “The dogs deserve the best. We’d rather take money out of our own budget than our dogs.”