After two decades running his own management consultancy in Colwyn Bay, north Wales, 59-year-old Len Wilson was looking forward to retiring next year and embarking on a road trip around Europe with this wife Vanessa.

But the Wilsons’ plans have been blown off course by the coronavirus pandemic hitting his business revenue. Cash that was earmarked for his pension has been diverted to support the business.

“As a consequence, I will have to carry on working, on a part-time basis, for up to three years,” said Mr Wilson. “We won’t be going away next year. It is frustrating but we have to be pragmatic given the circumstances.”

Across the country, hundreds of thousands of workers in their fifties and sixties are facing up to the prospect of working longer than anticipated, or dipping into retirement savings prematurely, as the Covid-19 crisis takes its toll.

“Some clients have decided to keep on working beyond the date they had planned to retire,” said Christine Ross, client director with Handelsbanken Wealth Management.

“I am [also] aware of instances where individuals who are still working have accessed their personal pension arrangements earlier than anticipated in order to bridge the income gap until their earnings return to pre-pandemic levels.”

The coronavirus crisis has disproportionately affected the youngest and the oldest workers in the economy, since they have so far borne the brunt of job losses.

Older workers are particularly sensitive to economic shocks as they have less time to recover financially from a market blow to their pension funds, or loss of income, before retirement.

The number of over-50s on unemployment-related benefits nearly doubled as a result of the pandemic, increasing from 304,000 in March to 588,000 in June, according to analysis by the Centre for Ageing Better, an independent think-tank.

Further, there is a risk of a surge in job losses for older workers when the government’s furlough scheme ends this month, with one in four workers in this age group, 2.5m in total, having been furloughed. Of those who were still working, 20 per cent were working fewer hours.

“Hundreds of thousands of these workers may be unable to return to their previous jobs as some sectors struggle to recover,” said the Centre for Ageing Better.

Advisers say over-50s who have been affected by the crisis are having to rapidly revise retirement plans.

“We are increasingly hearing from a large number of our 28,000 members who are concerned about the size of their pension pots, as a result of the severe impact of Covid-19 on their finances this year and what they see as bleak options for older workers on the horizon,” said Natasha Oppenheim, chief executive of No Desire To Retire, which provides employment advice and support to older workers.

“Compared with, say, two or three years ago, loss of income has become their primary motivation for seeking employment beyond statutory retirement age.”

Increased job insecurity is feeding through to increased retirement insecurity for older workers on a national level.

Financial woes for older workers have been compounded by an increase in the state pension age, which this month rose to 66 for men and women.

Eligibility for the full state pension, currently £9,100 a year, is calculated on national insurance contributions, and cannot be taken early.

“I do think there is a strong case — reinforced even further by the recent pandemic — to allow people who need it the chance to access their state pension early, even if at a reduced rate,” said Ros Altmann, a former pensions minister.

“If they are unlikely or unable ever to return to work, then it seems unreasonable to force them to wait so long for their state pension payment.”

Campaigners are now urging the government to pay more attention to the plight of older workers.

Last month, the government announced its £2bn Kickstart scheme to help young people on universal credit, the main welfare benefit, back into work. But there was no similar intervention for over-50s, an age group that already suffers from employment discrimination. 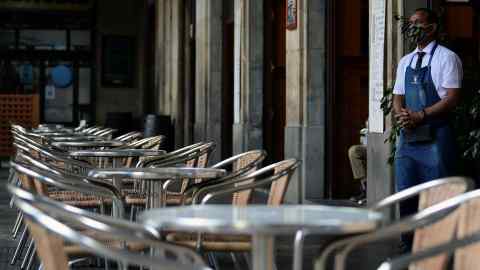 “Older workers who find themselves unemployed as a result of Covid-19 are likely to find it much more difficult than other ages to get themselves another job,” said David Sinclair, director of the International Longevity Centre, a specialist think-tank.

“Without further support from government, a huge number of people aged over 50 will find early retirement forced on them.”

The Department for Work and Pensions said jobcentre work coaches supported people of all ages to develop their careers, with its Plan for Jobs doubling the number of frontline work coaches to 27,000 by March 2021.

“We’ve also launched a new £2.5bn national skills fund, and we continue to work with employers through our Fuller Working Lives service to help them recruit, retrain and retain older workers,” the department said.