Andy Burnham, mayor of Greater Manchester, is to hold further talks with Number 10 on Sunday about moving the region into the highest level of Covid-19 alert, amid rising north-south tension on the issue.

Mr Burnham said he was holding out for more economic support for people whose livelihoods would be ruined by the move into tier 3, saying he was fighting for every part of the country.

“This is not just Greater Manchester’s fight,” he told the BBC’s Andrew Marr Show. He said it was “everyone’s concern because everywhere could end up in tier 3” over winter.

Michael Gove, cabinet office minister, said the government was willing to impose the toughest restrictions on Manchester, but insisted that the government wanted to reach local agreement if possible.

Mr Burnham will hold talks on Sunday with Edward Lister, Boris Johnson’s right-hand man, but the impasse has caused increased political strains between north and south and within the Conservative party.

Some 20 Tory MPs, whose constituencies are little-affected by the virus, wrote an open letter to Mr Burnham and other regional leaders asking them to get the virus “under control” in Manchester to avoid the “pain” of a national lockdown.

Led by Jerome Mayhew, the MP for Broadland in Norfolk, they said: “We know you are calling for a national lockdown now but urge you to reconsider.” Some northern Tory MPs said privately the letter was sanctioned by Number 10 and was misguided.

Mr Burnham said: “I’m not sure a sort of ‘we’re all right Jack’ letter from a group of southern Conservative MPs is going to cut much ice here.”

The Labour mayor wants Rishi Sunak, chancellor, to increase the rate of wage support available for people whose employers are forced to close by tier 3 restrictions, which apply to pubs and bars but can include gyms, hairdressers and leisure facilities.

Mr Burnham wants wage support to increase from 66 per cent under Mr Sunak’s new local furlough scheme, to the 80 per cent available from the state at the start of the pandemic. 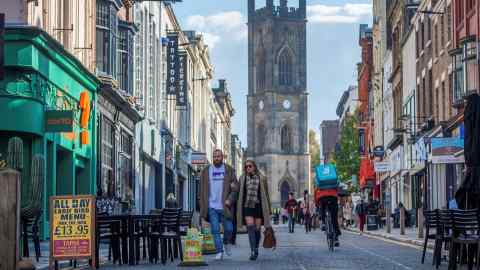 Mr Gove said that many people would receive at least 80 per cent of their income because of top-ups from the universal credit system. He said the problem could have been settled days ago “if the political leadership in Greater Manchester had recognised the scale of the problem”.

The possibility of the dispute being settled by additional Treasury funding was raised by the disclosure the Liverpool city region — the first part of England to enter tier 3 — had received a further £30m to help local businesses.

Civic leaders agreed the region’s 1.6m people would be subjected to the highest, tier 3, measures, on Monday. But after other northern leaders refused to follow suit the government has increased its financial support.