MPs have called on the UK government to act swiftly to make its welfare system more generous and ensure that people are not left destitute while they wait for a first benefits payment.

A report by the cross-party House of Commons work and pensions select committee published on Monday warned that the five-week wait for an initial payment under the new universal credit system left many people facing a choice between a long period with no income or “the risk of debt and hardship later” if they asked for an advance that would be deducted from their future payments.

“There is a growing body of evidence that moving to universal credit leaves many reliant on food banks, falling seriously behind with their rent and even experiencing increased levels of psychological distress,” said Stephen Timms, the committee’s chair.

The committee called for the government to make permanent the recent £20-a-week uplift to the standard allowance in universal credit — which is set to expire next March. It also urged ministers to introduce a system of “starter payments” to all new claimants, and some of those moving on to the system from other benefits, to ensure they could pay for basics while waiting for regular payments to begin.

Ministers have argued that the five-week wait is both a conscious policy choice and one that cannot be reversed, because it is built into the IT system on which universal credit runs. The committee shadowing the work of the Department for Work and Pensions said the pandemic had shown the strengths of the system’s automated processes — since a manual process could not have coped with the huge surge in claims seen at the start of the lockdown — but that there was far more the government could do to make it more flexible and mitigate its unwanted effects.

The miserliness of the UK welfare system — with unemployment benefits replacing a far smaller proportion of earnings than in many other European countries — is a growing concern as new restrictions imposed on large parts of the country threaten a fresh wave of job losses.

Over the weekend, Downing Street was at loggerheads with local leaders in Greater Manchester, who have been pressing for more generous wage subsidies for workers at businesses that would be forced to close if the region comes under tighter coronavirus restrictions.

Rishi Sunak, chancellor, argued that the support on offer through his job support scheme — 66 per cent of wages for those whose businesses had to close — could for many low-paid workers be topped up by universal credit, totalling up to 90 per cent of their usual wage. 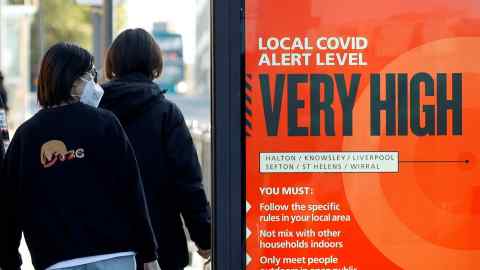 But economists at the Resolution Foundation, a think-tank, said very few households would be eligible for as much as this. The bigger issue, they noted, was that many of those who lost work as a result of the new restrictions would not qualify for the job support scheme at all — and would have to fall back on universal credit alone, which would pay them about half as much.

The OECD, the Paris-based organisation, noted last week that the UK’s safety net for the unemployed remained less generous than that of many other countries even after temporary measures taken at the start of the pandemic — including increasing the standard allowance and better aligning housing benefits with local rents.

Mr Sunak has not yet said whether these changes will be made permanent, but Thérèse Coffey, the secretary of state for work and pensions, suggested in an interview with the Financial Times that the government was more likely to focus funds on certain groups of claimants — for example, those with children or those at risk of losing their home — than to maintain the increase to the basic rate.

Iain Porter, policy and partnerships manager at the Joseph Rowntree Foundation, a charity, said cutting this uplift would be a “huge mistake”, with universal credit now crucial for millions of families to “keep their heads above water”.