Rapid testing will be used to prevent people exposed to coronavirus from having to self-isolate under a new testing strategy being piloted in Liverpool.

Under the plan, people who have come into contact with someone who has Covid-19 will be offered a rapid test every day for seven days, and they will not need to isolate unless they receive a positive result, Boris Johnson will announce on Monday.

If the trial is successful, it will be rolled out across the NHS and care homes in December, before being extended to the entire population from January.

The news follows modelling by both the Scientific Pandemic Influenza Group on Modelling (SPI-M) and Public Health England which found there would be little extra risk in allowing the contacts of infected people to continue working or attending school if they agreed to regular testing, potentially liberating tens of thousands of people and boosting the economy.

“If someone in a class tests positive we can test the other kids to see if they have got it or not. If they don’t and they keep getting regular tests, they won’t have to self-isolate,” said Joe Anderson, mayor of Liverpool. “We are going to roll it out for church services, weddings and funerals too.”

The rapid lateral-flow tests currently being used around the country can provide a result in 30 minutes without the need for laboratory processing. The government has spent over £2bn on hundreds of millions of these rapid pregnancy-style tests, which are the linchpin of its Moonshot testing strategy.

One of the things that people hate is that all their mates get locked up. So if you can keep people moving . . . then you’re on to a winner

The SPI-M modellers found that using rapid tests to eliminate unnecessary self-isolation for contacts of those who had tested positive was likely to increase compliance with quarantine measures.

Some experts believe that only around 11 per cent of people in the UK who have been in contact with someone who has tested positive for Covid-19 are quarantining. Scientists argue that people are more likely to adhere to quarantine rules if there is clear evidence they have the virus, or if there are incentives to do so.

“Unless you have a benefit to both positive and negative [test results], there will always be a significant group who decide not to take part, and that group will always be more infected,” said one member of the Spi-M group involved in the modelling work.

Liverpool has been the site of a mass testing experiment and aimed to test its entire population of 500,000 in the two weeks beginning November 6, but even with the help of the army it only managed 125,000.

However, Mr Anderson pointed out that the programme had identified more than 1,200 positive cases among asymptomatic people. The rate of infection in the city has dropped from more than 700 per 100,000 people at the start of November to 244 per 100,000 people by Friday.

“This has been a success. The virus was out of control. Now it is under control,” he said. 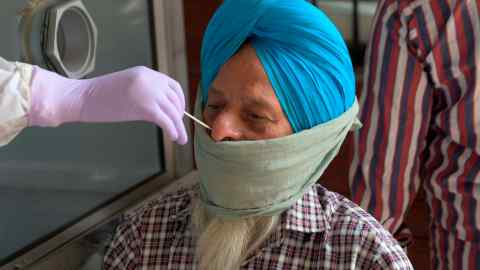 Mr Johnson will also announce on Monday that areas in Tier 3, classified as “very high alert” for Covid-19, will be offered extensive community testing as part of the Covid Winter Plan.

Workers in food manufacturing, prison staff, and those delivering and administering Covid vaccines will also be offered weekly testing from December.

Louise Kenny, pro-vice chancellor of the University of Liverpool, which is evaluating Liverpool’s testing programme, backed the new approach of testing potential contacts of those with Covid-19, called “serial testing”.

If your NHS app pings and tells you that you brushed past someone in Aldi who had tested positive you do not have to self-isolate until you test positive yourself. It’s liberating.”

Prof Kenny said this would encourage people to get tests. In many poorer parts of Liverpool take up of testing was low because people worried that if they were positive, friends and relatives would have to stay at home and potentially lose income.

“One of the things that people hate is that all their mates get locked up,” said John Bell, regius professor of medicine at Oxford university who has been involved with validating new tests. “So if you can keep people moving . . . then you’re on to a winner.”

“If someone isn’t immune and they have a contact, you give them 10 tests and get them to do it everyday,” he added.

The Department of Health and Social Care said in a statement: “Guidance on infection control measures are constantly under review to ensure we can return to normality as soon as possible while controlling the spread of the virus.”