I’ve always been interested in the particularity of objects; the details. It’s probably why I work in a museum – because I can get really close up to objects, see how they work. Show me a bag and I’ll open it. If it’s a dress, I’ll turn it inside out. Pockets, as far as I’m concerned, are for putting your hands in and, as a fashion curator at the V&A, I’ve found some surprising things in them over the years.

It all began when I was a child. Because I was short-sighted, anything more than a few feet away was a blur. I liked solitude and quiet, and was happiest lying on my stomach in the long grass making fairy skirts out of geranium petals or hiding in the airing cupboard reading everything from Tarka the Otter (I wept inconsolably) and The Secret Garden to my grandmother’s Mills & Boon.

But the book that really fascinated me was The Borrowers by Mary Norton (who I have just discovered was also very short-sighted and, in her own words, an “inveterate lingerer”). I got completely immersed in this magical, minuscule world that existed in the liminal spaces of ordinary households; how wonderful that the Borrowers’ surnames – the Clocks, the Overmantels, the Linen-Presses – reflected where they lived. Moreover, it explained where things disappeared to, such as hair grips, knitting needles and cotton reels (which the Borrowers used for stools). It was all these details, the way objects were repurposed – the postage stamp hung as a painting, the carpet made of blotting paper – that made me love their runcible domesticity so much. Above all, I liked the descriptions of their homemade clothes: the ankle boots made out of old kid gloves, the way the buttons were all out of proportion – buttons of all sorts have fascinated me ever since.

I was encouraged in my obsessions: dolls’-house furniture in my Christmas stocking – a real porcelain bath and sink with gold taps, and lightweight little chairs that kept falling over; a diminutive china tea set in a cardboard box that I kept for years. I wrote stories, too, in tiny books made from folded paper for an imaginary library. My world was one of interiors, and the world seemed richer when it was miniaturised. So no wonder that I was attracted to the museum, with its secret passageways, locked cupboards and cabinets full of concealed drawers. Here rest treasures that may be small in stature but tell stories on a grand scale: portrait miniatures that you need a magnifying glass to appreciate, painted with brushes as thin as a single sable hair; Elizabethan caskets with embroidered figures and beguiling, over-sized insects; samplers worked by a child’s hand in almost invisible cross-stitch; apprentice shirts rendered in perfect, scaled-down detail and, most wonderfully, two 18th-century dolls, Lord and Lady Clapham, beautifully dressed down to their underwear, with spare clothes to boot and a chair each to sit on.

The obsession for small things continued when I had children of my own. Their world became mine as we sat around the kitchen table, heads touching, making potato prints. I kept all their creations: the wobbly pinch pots, pressed into shape by little fingers, the egg trays filled with tissue flowers, the matchboxes filled with surprises for me – a bead, a leaf, a scrap of paper with pretend writing on it.

And these needed somewhere to go, for where else was I to keep my memories, or the things that people bestowed upon me for safekeeping: a leather diary from 1911 with microscopic writing (who owned it?); an ivory fan from Japan the size of my fingernail; a silk handkerchief in a box inscribed “This token of affection Take, and keep, for the Sender’s sake”; a minute pair of clogs from Holland; a mermaid from a Spanish holiday with black hair and plastic fishtail; a tear-splashed letter written in purple ink; and my woes written on a Post-It, many of which are still troubling me now. And then the glitter of silver: Edwardian finger purses, barely capacious enough to hold a sixpence; chatelaines with dangling needle-case and scissors; a pincushion in the shape of a bear.

In comparison with the actual museum, where the collections are so important they are kept in perpetuity, my own archive is ephemeral. Open the doors of the old glass-fronted cupboard where it’s kept and it wouldn’t take more than a stiff breeze to blow the dried rose petals and the seedheads and the locks of hair away. All collections are made up of matter and memories – even if, like mine, they are of little consequence. As Mary Norton knew, the value of small things is a matter of perspective: for a Borrower, a thimble is handy for warming up soup and a teazle makes a very good broom to sweep the cobwebs away.

Claire Wilcox is the senior fashion curator at the V&A Museum, a professor in fashion curation at the London College of Fashion and author of Patch Work: A Life Amongst Clothes (Bloomsbury, £16.99) 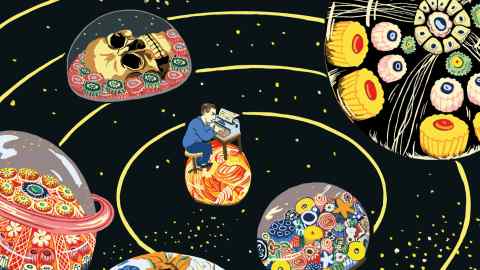