An increase in property sales since lockdown ended is unlikely to continue beyond April next year, one of the UK’s largest housebuilders has warned.

Redrow, the FTSE 250 builder, said buyers had returned quickly since the market reopened in May, and the company had £1.42bn in forward orders agreed, a record level.

That demand was unlikely to be sustained, however, with the company noting that buyers were rushing to act now to take advantage of the government’s Help to Buy equity loan scheme and a stamp duty holiday introduced in July.

That holiday, which is saving buyers up to £15,000 on a property purchase, ends on March 31 2021. The current version of Help to Buy — a government loan that means buyers need as little as 5 per cent of a property’s value as a deposit — ends on the same date, stoking fears that sales will dry up from April. The scheme has been used by almost 300,000 buyers since its introduction in 2013.

John Tutte, Redrow’s chairman, said: “My concern is with the combination of issues here: where is the economy going to go? Where is unemployment going to go? Where are we going to be with Brexit? Then we’ve got stamp duty coming to an end and Help to Buy changes . . . It doesn’t seem sensible timing [for the government] to crate a hiatus in the market at the end of March.”

Redrow was announcing its results for the year to June 28. The company posted profits of £140m for the period, compared with £406m for the previous 12 months, after swinging to a loss in the second half of the year. 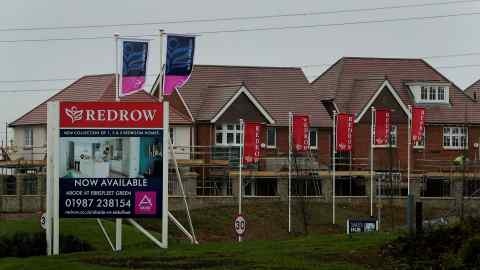 Redrow invested heavily to build more homes in the final quarter of the financial year, between March and June. The company had hoped to catch a wave of demand from buyers using Help to Buy before it is limited to first-time purchasers and regional price caps are introduced next year. But coronavirus forced sites to close from late March, and Redrow built just 264 homes in the final quarter of the year compared with 2,345 in 2019.

The results “were significantly affected by Covid-19 in a financial year that was budgeted to be disproportionately weighted to the final quarter”, said the company, which added that the pandemic would have “an enduring impact on the market”.

Redrow’s share price fell by 2.4 per cent to £4.45 on Wednesday morning. Having plunged from February highs of £8.48 to £3.16 in mid-March, shares have gained ground since.

Aynsley Lammin, an analyst at Canaccord Genuity, said: “[Redrow] is in a better position than people had thought it would be in April or May, but doesn’t remove any of the macro fears. Post-lockdown there’s been really good trading, but nobody knows whether that continues beyond spring next year.”

The future of farming in drought-hardened Australia

Wale of a time: 18 autumn corduroy buys
23 mins ago