Hong Kong is not a city that favours the pedestrian.

Simply crossing the street can involve detours through concrete stairways, elevated sky bridges and subterranean underpasses that, just a year ago, were wallpapered with Post-it notes bearing pro-democracy slogans. Then Covid-19 arrived and everyone went indoors.

With entertainment options curtailed, I’ve spent many weekends strolling around Tai Hang, my neighbourhood and one of the city’s more walkable. Nestled between the soaring towers of Causeway Bay and wooded mountains, it also offers a keen vantage on the tumultuous events of the past year.

Once a waterfront fishing village, the area held a squatters’ settlement in the 1960s when Hong Kong received an influx of refugees from mainland China before becoming a working-class neighbourhood. How long it will remain so is in question: family-run auto-repair shops are increasingly squeezed out by cafés pouring single-origin roasts and austere izakayas priced for the sports cars parked outside. Some of its squat, crumbling apartment blocks have already been replaced with luxury high-rises. Change is always coming to Hong Kong.

Tai Hang is also famed for its annual Fire Dragon Dance during the Mid-Autumn Festival, when locals dash with a 67m frame of burlap and wire, bristling with lit joss sticks, through the streets. On my second night in the city back in 2017, I stood transfixed, bleary-eyed from the incense. Two weeks later, I moved in down the block and am still living here.

My regular walk is from Tai Hang to Tamar Park, a 4.5km route, most of it along Hong Kong island’s central waterfront. Along the way, I pass tokens of the city’s colonial history before ending at the nerve centre of the city’s government district, the scene of some of last year’s most combative protests. It usually takes me a bit under an hour; setting out after work grants a sunset over the water — one reason I’ve kept returning even as coronavirus restrictions have eased and businesses reopened.

First, begin with a flat white at Fineprint, on Lily Street, best sipped from a sidewalk stool, or a pint of craft beer at renowned chef May Chow’s Second Draft on Tung Lo Wan Road, enjoyed indoors (protected by plastic safety dividers) or outside for greater social distancing. For a snack on the way back, duck into Chow’s cheerful eatery Little Bao, on Kingston Street opposite Victoria Park; don’t miss the Brussels sprouts.

Crossing the street from Fineprint, I proceed along a brick path popular with dog walkers, often accompanied by Toby, a poodle-mix I adopted in the midst of May’s lockdown. The path cuts between public tennis courts, which are occupied from morning until after sundown, and Queen’s College, the oldest government secondary school in Hong Kong. The student orchestra’s brass section can often be heard practising in the stairwell. 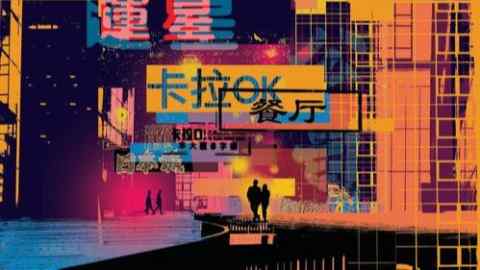 It’s also a detour around a notable neighbourhood addition: Beijing’s Office for Safeguarding National Security, which took over the Metropark Hotel in July under China’s forbidding national security law. The presence of Chinese state security services cast a pall on one of Hong Kong’s more stylish districts, but on weekends, the au courant still arrive to brunch and pose with street art.

The path empties facing Victoria Park, the city’s largest urban green space and a welcome relief from a diminutive flat. Its royal namesake, Queen Victoria, is commemorated in a sculpture by Mario Raggi, who created the Benjamin Disraeli that overlooks Parliament Square in London. Behind it is a wide lawn — favoured by picnicking domestic workers on Sundays — and another hidden gem: Warung Surya, a kiosk that serves delectable rendang, an Indonesian beef and coconut stew.

Exiting the park from the far side — through a tunnel, across a flyover — I cross the street and turn left: the buildings fall away and Victoria Harbour emerges ahead. From here, a waterfront promenade stretches 7km to Kennedy Town.

Columns supporting a highway overhead were previously splashed with anti-government slurs — too profane to print in the Financial Times — from the demonstrations that roiled Hong Kong last year. Before coronavirus, to be outside was to be inescapably surrounded by politics — the urban landscape was the canvas for popular discontent. But a crude repainting has been attempted.

The view from the promenade is stunning: glass steeples, encircled by green mountains, cleaved by the dark waters of the causeway. In the distance: the island’s tallest peak, also named for Victoria (as was the original colonial capital, encompassing today’s financial district). Fishing lines bob between sampans. For some, these boats offer a creative solution to the world’s least hospitable property prices.

Entering Wan Chai, one of the city’s densest districts, I pass the Noonday Gun, the sky-blue cannon that once saluted arriving foreign executives of Jardine Matheson, one of the original trading houses established in the colonial city to connect Chinese goods with European markets. To this day, the group’s top officials are informally known as taipans.

About 1.5km beyond is Golden Bauhinia Square, site of the 1997 handover from Britain to Beijing. On the event’s 20th anniversary, pro-democracy protesters draped a black shroud on the sculpture of the city’s flower.

The sun is descending but my destination has come into view: Tamar Park, a grass carpet that rolls out to the waterfront from the monumental postmodernist “doorway” of Hong Kong’s government offices. Its architect, Rocco Yim, also contributed to the restoration of Tai Kwun, formerly the central colonial police station, and now an arts and culture hub.

It was also here, on July 1, 2019, where I stood when black-clad protesters ransacked Hong Kong’s parliament. “It was you who told me peaceful marches did not work,” they wrote inside the chamber with spray paint.

A year later, and with Beijing’s security services operating freely throughout the city for the first time, it is difficult to imagine the protesters’ returning in force.

These days, bars and restaurants mostly full, and crowds have returned to parks. But a September election was postponed for a year, with officials citing coronavirus; whether it will transpire in 2021 remains to be seen. The government offices are now surrounded by barricades, the message clear: stay away. Hong Kong’s cherished freedoms may not outlive the pandemic.