Mike Ashley’s Frasers Group has warned administrators to Peacocks, Jaeger and Edinburgh Woollen Mill that they must avoid giving a preferential deal to the former owners of the collapsed retail group.

Frasers Group said its attempts to discuss acquiring the brands had been rebuffed. “We have followed up our interest daily via email and calls asking for updates and information [but] have been met with delays and absolute refusals,” Frasers said.

“We understand, through FRP, that [EWM’s] management are flatly refusing to provide details,” Frasers said. The group said it had instructed lawyers to “remind” the administrator FRP of “their obligations to run a fair and transparent process”.

A senior executive at another firm involved in the bidding process questioned whether it was right that EWM managers were on calls with potential bidders when they were “looking to make their own offer”.

FRP said it was “well aware of our duties as independent officers of the court, take them extremely seriously and are committed to running fair, transparent and open processes”. It added that a sale would only be made “in the manner prescribed by law, applicable regulations and best practice”.

EWM declined to comment. A person close to Mr Day confirmed that senior executives at EWM brands had participated in calls with bidders, adding that they were “key people that any bidder would want to talk to”.

Mr Day has indicated to close associates that he had dropped plans to buy back any of the brands himself, but it is still possible that individual management teams may do so. They include Mr Day’s daughter Lauren and long-time associates Stephen Simpson and John Herring. All are directors at the three companies, according to Companies House filings. 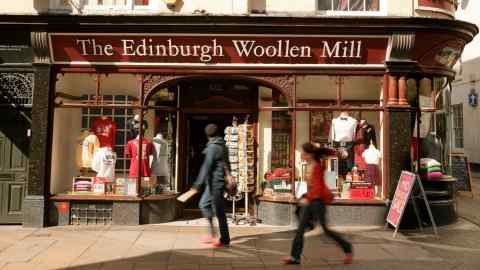 “He has decided not to make an offer for any parts of the business, as the last two months have been so draining,” a person close to Mr Day said. “He has found the whole thing shattering.”

The controversy is common in administrations when former owners or management teams have the opportunity to buy back assets while dumping liabilities.

In recent months, lifestyle label Cath Kidston and formalwear group TM Lewin have been put into administration and re-acquired by their existing shareholders.

Such deals could be trickier in the future. The reintroduction of “crown preference” from December means that HMRC will automatically rank as a senior creditor. A government review of rules may also require administrators to demonstrate that the insolvent business was widely marketed, although this change is not expected until next year.

Bidders for EWM’s assets have also raised questions around two charges registered against the company in March and September, which made Mr Day a secured creditor and improved his chances of recovering money owed to him.

Frasers said it believed that by expressing objections to the way the process had been run, it had delayed an “inevitable” sale to acquirers linked to the former management.