Deloitte will permanently close four of its 20 UK offices in the coming months as the coronavirus pandemic has forced the accounting group to cut costs and remote working has reduced its need for expensive property leases.

About 500 employees who work at Deloitte’s offices in Gatwick, Liverpool, Nottingham and Southampton will be moved to other locations or offered full-time remote working. One person close to the firm said Deloitte’s property team was “continually reviewing” the rest of its real estate portfolio.

Deloitte, which employs 19,000 people in Britain, is one of the first large UK companies to decide not to renew leases on a number of its properties amid a mass shift of office workers to homeworking during the pandemic.

Stephen Griggs, Deloitte’s UK managing partner, told the Financial Times: “Covid-19 has fast-tracked our future of work programme, leading us to review our real estate portfolio and how we use our offices across the UK, including London.”

He added that all employees at the four offices due for closure “will continue to be employed by Deloitte and any proposed change is to our ‘bricks and mortar’, not our presence in these regions”.

The Big Four accountant cut pay for its partners by a fifth in April to protect jobs and preserve cash during the coronavirus crisis. It revealed last month that the UK firm’s distributable profits in the 12 months to the end of May fell 16 per cent to £518m. 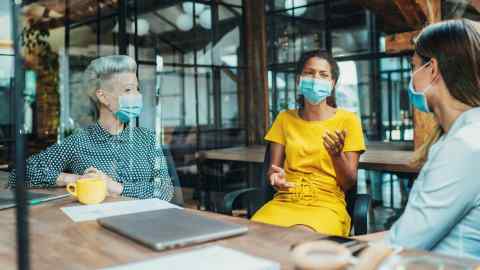 CBI, the business lobby group, has warned that a long-term shift to working from home could create “ghost towns” because city centres and local businesses rely on passing trade from office workers. The City of London Corporation, the municipal authority covering the capital’s business district, cautioned that the “blanket recommendation to work from home risks stalling the capital’s recovery and damaging long-term competitiveness”.

In August, Capita, a major government outsourcer, revealed it was planning to close more than a third of its 250 offices to allow thousands of its staff to work from home for good.

More companies have been forced to consider long-term strategies for remote working since the UK government abandoned its push for more workers to return to offices following a surge in Covid-19 infections last month.

That is adding to pressure on an office market already facing deep disruption and questions about its future. Take-up of new office space in London has declined dramatically, and is at present just over half the levels seen in 2019, according to property consultancy Colliers International. Tenants are also dumping offices back on to the market, with 1.5m square foot of space released since April, Colliers has said.