Business groups, including the CBI and International Chambers of Commerce, have joined growing calls for the government to maintain its overseas aid target of 0.7 per cent of gross domestic product ahead of the chancellor’s spending review announcement on Wednesday.

In a letter to prime minister Boris Johnson, seven organisations including the Ethical Trading Initiative and the UN Global Compact Network UK, argue that the proposed cut to the aid commitment would damage the country’s “global standing”.

Rishi Sunak, the chancellor, is expected to announce a temporary reduction of aid to 0.5 per cent of GDP, a move that could save about £4bn a year.

But the letter’s signatories warn that reneging on the 0.7 commitment during the height of the pandemic would “reduce the UK’s credibility” on the world stage and “hamper gains made on social and economic development, which are prerequisites for businesses to trade”.

Last week, Mr Johnson announced that the Ministry of Defence would receive an additional £16.5bn over the next four years in addition to its existing annual budget, an investment that would, he argued, “transform” the armed forces and “bolster” the country’s global influence.

Ministers have been quick to deny suggestions that the defence funding will come from cuts to the aid budget. Ben Wallace, defence secretary, said the government would not be “abandoning” its commitments to overseas aid. “We’re still one of the most generous givers of international aid,” he said.

However, the increased defence investment has amplified calls from businesses, MPs and charities to maintain the UK’s commitment to the 0.7 per cent of GDP target.

On Friday, nearly 200 charities, including Save the Children and Christian Aid, wrote a letter to the prime minister arguing that aid cuts would send a clear signal that the UK was willing to “balance its books on the backs of the world’s most marginalised people”.

Justin Welby, Archbishop of Canterbury, added his voice over the weekend, arguing that maintaining the existing aid commitment sent a strong signal that the UK was “a reliable partner for long-term economic, social, environmental and educational advancement across the globe”.”

Former prime ministers David Cameron and Tony Blair voiced their concern in a joint statement to the Telegraph newspaper. Mr Cameron argued that the decision would represent a “moral, strategic and political mistake”.

“I was responsible for this budget in Whitehall and there is no doubt that this decision will lead to tens of thousands of otherwise preventable deaths,” said Mr Mitchell. 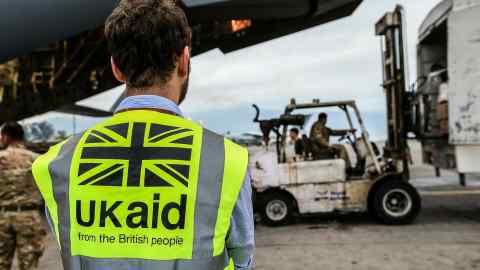 One senior Conservative official who was against the cut said: “What a foolish way to start the UK’s chairmanship of the G7 and present ‘Global Britain’ to the international community by destroying the one area which has earned huge respect for our country all around the world.”

The row over the aid budget comes as the chancellor attempts to manage the UK’s finances following months of economic instability caused by the pandemic, with Mr Sunak warning on Sunday that the economy was experiencing “significant stress”. “There’s more stress to come,” he added.